In the center of the south-west of the Kingdom of Morocco and on the coast of the Atlantic Ocean lies the city of Sidi Ifni, distinguished by its geographical location, moderate climate throughout the year, and beautiful natural landscapes. In addition to its multi-tributary heritage, characterized by the Amazigh and Saharan cultures, carrying between its folds many architectural monuments that made this small city pride for its residents and a tourist destination that sparks the curiosity of its visitors.

Sidi Ifni, also named before Santa Cruz de la Mar Pequeña, used to be a Spanish enclave since 1930, then it was relinquished to Morocco in 1969 due to international pressure. Today it depends on its economy on fishing, tourism, and agriculture, and approximately 21 618 people inhabited it according to the last official census of the population in 2014.

The beauty of Sidi Ifni lies in the relaxing ocean-side scenery and the unique artistic imprint in the design of the city left by the Spanish colonization. We distinguish the dominance of the geometric art known as Art Deco, a French architecture based on symmetrical geometric curves and broken lines.

What to visit in Sidi Ifni

Legzira beach is about 10 kilometers from the city of Sidi Ifni. The name “Legzira,” meaning “the island,” is after the small island overlooking the place. It is distinguished by its mixture of beachy and mountainous nature and its reception throughout the year for different nationalities of tourists who wish to enjoy the purity of wildlife and the incredible mountain scenery.

Among the other qualifications of Legzira are the delicate and delicious fish dishes that hotels overlooking the sea depend on for their main meals. The fish there is acquired directly from local fishers who still rely on traditional fishing methods for their livelihood.

What captivates me the most is the natural rock carvings that filled the space, especially the two natural arches you can see in the picture below. Sadly the place lost one rock arch already, so don’t miss the chance the see the remaining one. 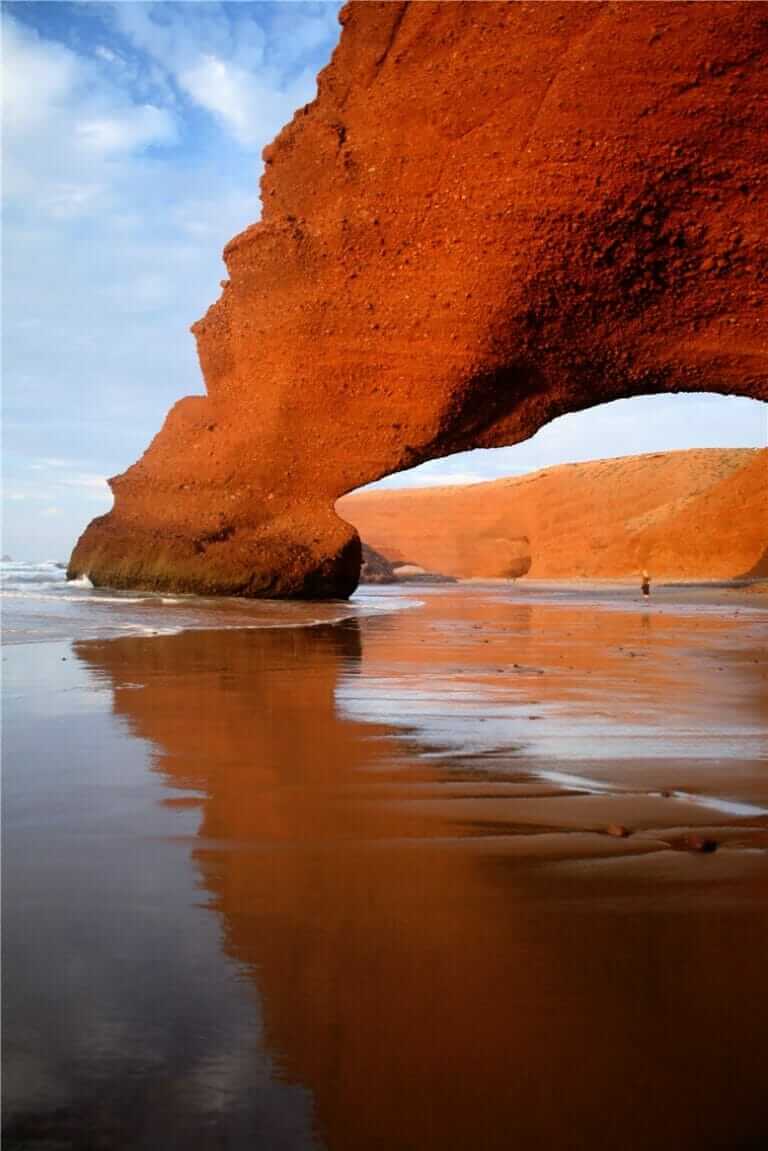 In 1934 Spain established one of the most important symbols of Sidi Ifni  Plaza Espagna, now called Hassan II Square. The Spaniards used it to commemorate the death of colonel Capaz. It was also a space for ceremonies, official occasions, and a place for military parades where the Spanish Governor looked upon them from the Royal Palace’s balcony. Today it has become an outlet for the inhabitants and an archaeological testimony that bears the memories of its ancient residents who still live in Sidi Ifni.

In the center of Plaza Espagna, Spain designed a sculpture in the form of the Francoist eagle, which was the symbol of the regime at that time, standing on the top of it a carved model of the portrait of colonel Capaz.

The Royal Palace is the place where the Governor issued the decisions for the city of Sidi Ifni. It’s a building with the Roman architecture touch, in the middle of the upper part of it a triangle with a mechanical clock. Its balcony overlooking the square was a rostrum for the Spanish ruler and a place to enjoy ceremonies and official parades.

The Governor’s Palace is on the right side of the Royal Palace, and this is where the general governor used to live in Sidi Ifni. It is a building mixed in its architecture between Moroccan decoration and Spanish architecture, with Berber windows and an Arab-Islamic door surrounded by European columns.

The Bagadoria and the bank

To manage the financial affairs in Sidi Ifni, Spain constructed two buildings: the Bagadoria and the bank. The Bagadoria is where they used to pay the workers and retirees of the Spanish army every Saturday.

The city of Sidi Ifni has its charm and history, and every building still standing there is telling us a story about the Art Deco period.