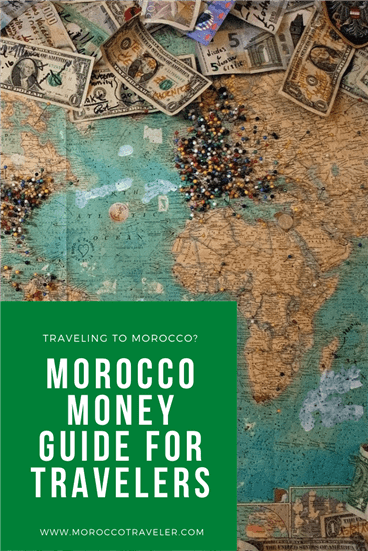 Moroccan Dirhams (Dhs or MAD) are the official Moroccan currency. They come in banknotes of four denominations (20 Dhs, 50 Dhs, 100 Dhs, and 200 Dhs) and coins of six denominations (10 centimes, 20 centimes, 1/2 dirham (half a dirham), 1 Dirham, 2 Dhs, 5 Dhs, and 10 Dhs). As a traveler, I advise you to use only 1 dirham and up, don’t bother paying the exact amount. When Moroccans are asked to pay 49.97 dirhams, they simply pay them 50 dirhams. It’s faster, and you avoid a lot of change in your pocket. 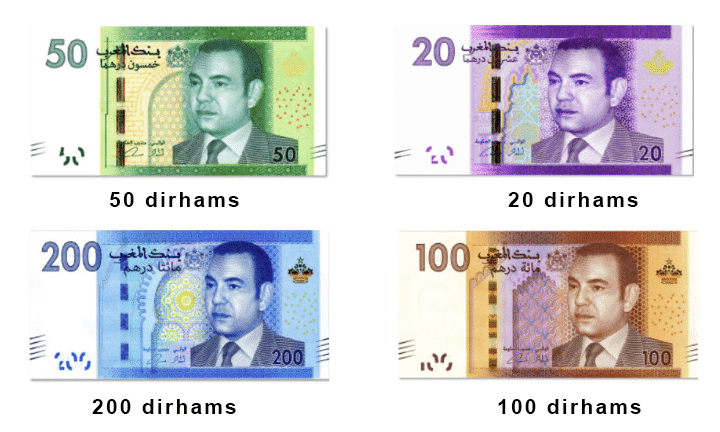 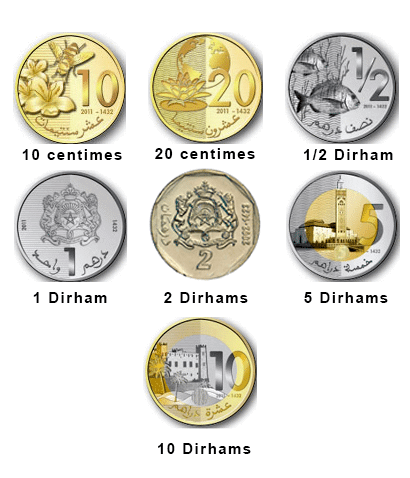 It’s hard to pay for cheap items or services with large notes, so you always need to keep enough small notes and coins. Using 100 Dirhams note for a 7 Dirhams bill is not a good idea.

1 US Dollar is approximately equal to 9.5 Moroccan Dirhams. If you are not using the US Dollars, you can use Google to get an idea about the exchange rate from your currency. Go to Google’s search bar and type “1 (your currency here) to MAD,”. i.e., 1 euro to mad. 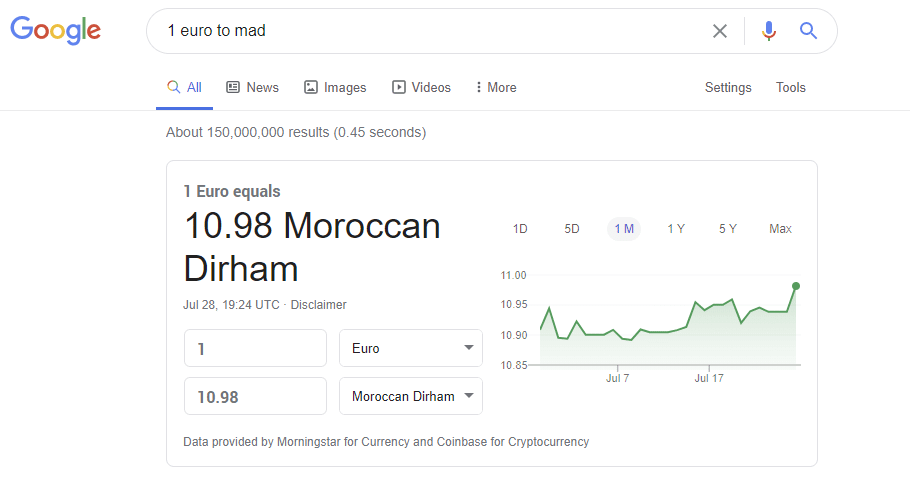 Note: If you are inside the country, people will call it simply “Dirhams”, but this same currency name is used for other countries like United Arab Emirates Dirham, so be careful when using a converter.

How to obtain Moroccan currency?

You are not allowed to bring Moroccan currency into the country, it is mainly aimed at business travelers, but it also applies to tourists. However, if you still have some spare change or banknotes from your last visit to Morocco, you can take these with you. Also, you can’t take Moroccan currency out of the country, so consider this.

Obtaining Moroccan Dirhams is quite simple:

Currency exchange bureaus are the best to change small amounts of money and don’t have credit cards, and sometimes there are additional exchange fees, so you may want to ask about that. You should always keep the receipt after exchanging money in a currency bureau; since you can’t take Moroccan cash out of the country, you’ll need the exchange receipts to change your leftover at the airport.

Also, if you’re using old versions or broken down bills, they may get refused. So make sure that you have the newest and cleanest banknotes when exchanging your national currency.

Credit cards can be used at any ATM in the country, and they are also available in some large shops, restaurants, hotels, and of course, all online payments for bookings. Make sure to give your bank a heads up before traveling to Morocco; they might limit or block your credit card if you use it outside of the country as a security measure, which could be extremely frustrating. Keep in mind that ATM’s maximum withdrawal amount is 2000 Dhs ($200). If you need a more considerable amount, you could either make several transactions or use different ATMs from different banks.

Generally, when using an ATM in Morocco, you’ll need a four-digit PIN code, so most cards with chip and pin technology are widely accepted. However, to use an American magnetic stripe card that doesn’t usually require a PIN code, you’ll have to get one issued by your bank before you travel.

Banks could also be used to get Moroccan Dirhams; they are available pretty much everywhere, but not all of them accept all currencies, and some of them don’t offer the service in the first place, and since they are used by locals too, you may be waiting for a long time.

How much money to take to Morocco?

This is pretty subjective, I can’t give you a clear answer but I can help you figure out the minimum amount of money that you’ll need during your trip to Morocco.

So if you’re visiting Morocco on a budget, you should expect a minimum of $30 per day, but if money is not an issue for you,  then we’re talking about $200 per day.

Now that we established the essential expenses, let’s move to luxuries: